One of the many reasons I like being married to Brody is that I feel like we complement each other well. Through our almost four years of marriage, we have adapted to each other to create a happy union.

For example, when I first met Brody, he rarely paid attention to prices and rarely considered items on sale. On the other hand, I grew up with a mother who bought just about everything on sale; I call this frugal (cheap sounds insulting). Money is often a reason for couples to fight, but I am proud to say that we have slightly altered our previous habits to meet in the middle.

There are some things in life I never would have imagined I would participate in or care about before I met Brody, but I embrace these interests because they are now a part of our life together. 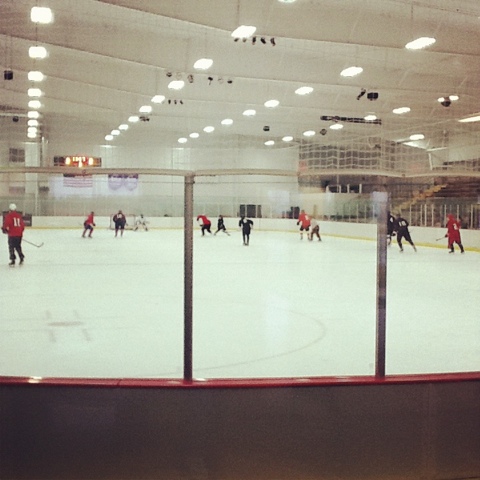 My view from the lobby watching Brody’s hockey league.

I knew NOTHING about hockey before Brody, but because he had (and still does) tickets to the Badgers’ home games, it was something we started doing together. When I first started watching, I could barely follow the puck. Now, because of Badger games and watching the Blackhawks on tv, I kind of know what is going on. I am still learning all of the referee calls/motions, but at least I can follow the puck and see the goals happen.

Before Brody, I didn’t eat a lot of meat and could’ve easily been a vegetarian. Being single made it difficult to cook full dinners, so most of the time, the only meat I would have would be deli meat for sandwiches. That all changed once we bought our house and moved in together.

Hard to see, but that food item on the far left is a brat.

Brody is definitely a “meat and potatoes” guy. I like meat – don’t get me wrong – but if it were totally up to me, we would have a meatless meal every now and then. Brody’s love of meat has encouraged me to try new recipes, often from Eat Live Run (I made her Creamy Chicken and Mushroom Pasta Skillet last night) and Skinnytaste.

My family had a shih tzu poodle mix named Boo. He didn’t care for kids, other dogs, cows, or barns (because cows were often by the barns). Brody’s family often had Golden Retrievers. When we began talking about bringing a dog into our family, I was hesitant about Goldens because they were bigger than what I thought I wanted and they shed like crazy. I am so glad I listened to Brody and let him convince me of the amazingness of Goldens. I cannot fathom a life without Moose and Frankie, and although they are both large (105 and 85 lbs. respectively) and they leave a blanket of hair for me to vacuum up every week, they are SO worth it.

Question:
What things did you start to care about or enjoy after moving in with your significant other?

This morning on the news, as I ran five miles (yah! I did it and got my butt out of bed!), the news anchor showed a picture of a new product she saw at Mounds (pet food store for those not in the Madison area). 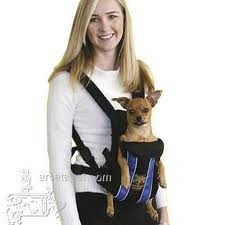 source
I chuckled thinking of either of my dogs in one of these. The news anchor thought it was funny and seemed to wonder if people really use these. The answer is yes; people do use these. One woman wrote on the NBC15 Facebook wall that she takes her dog on bike rides in it. This produced an even more amusing image in my mind. If I strapped Moose to the front of me and rode a bike, people would think we were on a tandem.

If you don’t want to spend the money on a baby “bjorn,” knit your own.

source
Plus, look how active you can be wearing one.

And just so the bigger dogs don’t feel left out, they can always be pushed around in a stroller.

source
Apparently there is a stroller that holds up to 115 lbs.

Do you do anything out of the ordinary for your pets? Have you ever seen anyone use one of the above items?

Today was a much better day than yesterday. When my alarm went off, I played the “I could just run after school” game but realized I was quite awake. The run went well and put me in a good mood. Running before school makes me such a better teacher; I demonstrate more patience and feel more productive.

Brody grilled out for dinner tonight, and it was simple and delicious. 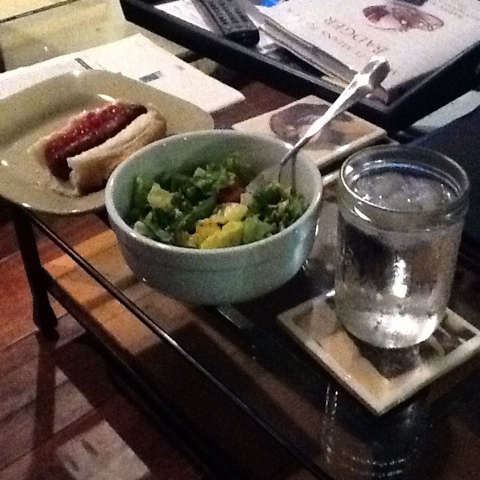 Salad with Italian dressing, a brat with ketchup, and ice water.

Now it’s time to relax on the couch (and probably watch the Blackhawks lose in overtime), scrounge the cupboards for some chocolate, and catch up on some blogs.

Questions:
Tell me something about your pet(s).
If you’re not from the Midwest, have you ever had a brat? Thoughts? Midwest folks, how do you eat your brats?

Welcome to Pint of Goals!

Hi there! I'm Angie, a 29 year old, married teacher who loves to run, eat, cook, and travel. My husband and I are also currently expecting our first child in June. I hope you enjoy my random adventures and tales from the midwest!