We made it up to the cottage for the first time this summer, and it was a relaxing weekend. It was a semi-successful first weekend getaway with Finley as well.

Our three and a half hour drive up to the Lakewood area began at 5:45pm. Finley was very alert for the first twenty minutes and seemed to like looking out the window (not that she can see anything). 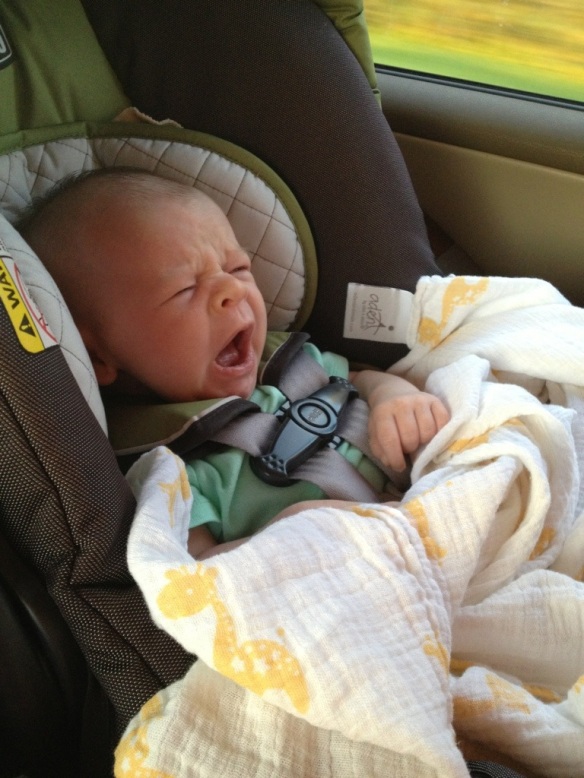 After a brief stop at Panera for dinner, we continued on and maybe made the mistake of not feeding Finley.

For the last twenty minutes of the ride, she was fuh-ssy! I kept her occupied with a pacifier while blasting the water sounds from the most amazing app: Relax Melodies. Thanks to Brad and Jess for sharing this lifesaver with me! Unfortunately, Finley had a rough start to the nighttime; she wouldn’t latch on when I was trying to nurse her and would cry inconsolably. Normally this means she has to burp, but that wasn’t the case this time. After an hour of fussiness, she fell asleep and ended up having a decent night.

My mom, sister, Brody, Finley and I spent most of Saturday on the deck overlooking the lake. The weather was perfect, and there was enough shade that Finley could be outside.

Brody found another use for the car seat.

Not only do the humans love the cottage but the dogs as well. Moose and Frankie haven’t exactly been neglected since Finley’s arrival but their activity has decreased. I still need to master walking Finley in the Bob stroller and walking them simultaneously. Also, the weather has been nasty, and the mosquitoes at the dog park are horrendous. Long story short, they had lots of fun playing in the water, taking walks, and even sleeping on the deck and dock.

Moose found a baby snapping turtle. He was very intrigued by it but didn’t try eating it.

My mom was watching Teddy, my uncle’s dog. Check out that killer underbite. He got along fine with Moose and Frankie, but Brody was not a fan – he just dislikes small dogs. 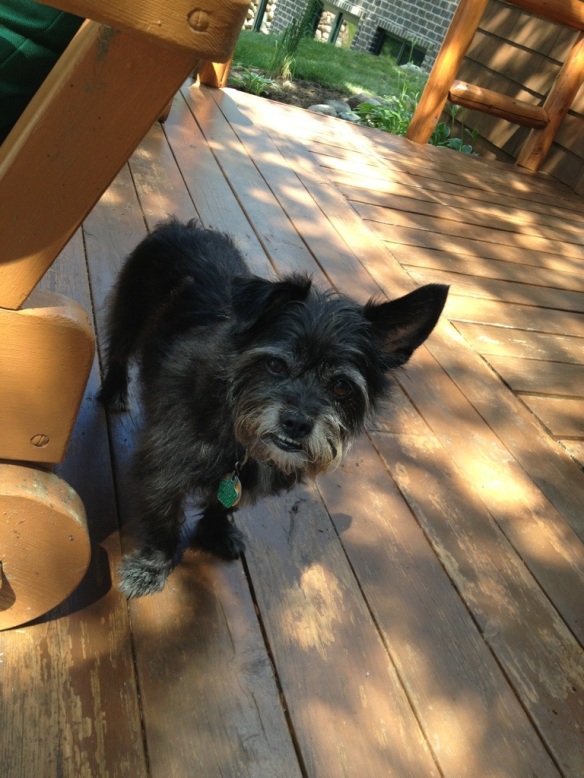 Finley spent time with her aunt. That rocking chair was my great-grandma’s, so Finley’s great-great-grandma.

And for the last picture, we’ll finish out with a selfie of Finley and I.

We had a rough night after getting back from the cottage. From 8:30-10:00pm, she was SOOO upset. Nothing was working. She kept showing signs of hunger but again refused to eat. Brody and I felt so defeated, but luckily my smart husband suggested taking a walk…and she fell asleep. Not wanting to disturb her, she was placed in the pack ‘n play in her car seat until she woke up at 1:30am. Hey – whatever works.

So while being at the cottage was mostly fantastic, Friday and Sunday night made it not the best weekend. We’re crossing our fingers that it was just a fluke because we’d like to go back up to the cottage in two weekends.

Questions:
What was the best part of your weekend?
Mamas: What’s your go-to trick to soothe an upset baby?